Some but not all IUL policies have these above features.

Most insurance agents find it’s easier to sell life insurance with minimum premiums. Often, when cash value accumulating life insurance is presented, it is shown with a level death benefit that will significantly increase the sales commission and the cost of insurance, retarding the growth of the cash value. If an initial higher death benefit is needed until the permanent death benefit grows, it is far less expensive to buy a term policy for the short-term, coupled with permanent IUL.

Let’s reconsider Jamie and Paris, the conservative couple from chapter 3, whose 401(k) account previously valued at $100,000 was cut in half due to the market decline in 2008. Then they were laid off from their jobs. They had to liquidate their 401(k) in order to survive. After penalties and taxes, only $25,000 was left to support them, and their 401(k) account balance had been drawn down to zero with no balance left to grow back.

In contrast, if Jamie and Paris had invested in an IUL, using the strategies described in chapter 8, the outcome would have been quite different. Specifically, they would not have participated in the 2008 stock market decline. Their $100,000 balance would still have been intact when they were laid off from their jobs. They could have borrowed, interest-free, the $25,000 needed to support themselves without paying taxes or penalties. That would have left a $75,000 balance that could resume growing as the market resumed growing in 2009. After becoming reemployed, they could have paid themselves back the money they borrowed or could have chosen not to, depending on their circumstances and desires. Wow, what a different outcome! A desperate situation that wiped out all their retirement would have been only a mild setback, and they could have easily recovered using the strategies in chapter 8.

“Curtis Hill has insight that needs to be heard and as a seasoned stockbroker he knows his stuff.” ~ Amazon Reviewer 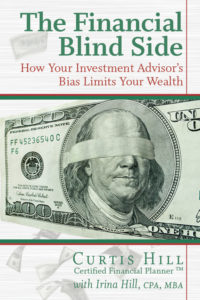 Buy it now on Amazon.

The Financial Blind Side Webinar

Curtis Hill provides insurance services through Serenity Wealth Management. Investment advisory services are offered through a separate entity, Portfolio Medics, LLC, a registered investment advisor.  Serenity Wealth Management and Portfolio Medics, LLC are not affiliated. Nothing in this website should be construed as investment, tax, accounting or legal advice. California Insurance License #0B50660

Information on any Security Broker can be checked at FINRA’s www.BrokerCheck.org

Information on any Registered Investment Advisor can be checked at SEC’s www.adviserinfo.sec.gov.

This site is published for residents of the United States and is for informational purposes only and does not constitute an offer to sell or a solicitation of an offer to buy any security or product that may be referenced herein. Persons mentioned on this website may only offer services and transact business and/or respond to inquiries in states or jurisdictions in which they have been properly registered or are exempt from registration. Not all products and services referenced on this site are available in every state, jurisdiction or from every person listed.